AhsayUBS (Ahsay Universal Backup System) is a low price yet powerful operating system for a backup appliance to operate with. It has been optimized for AhsayCBS to run smoothly on it. With AhsayUBS, you can get AhsayCBS deployed onto a bare server hardware within a few minutes. 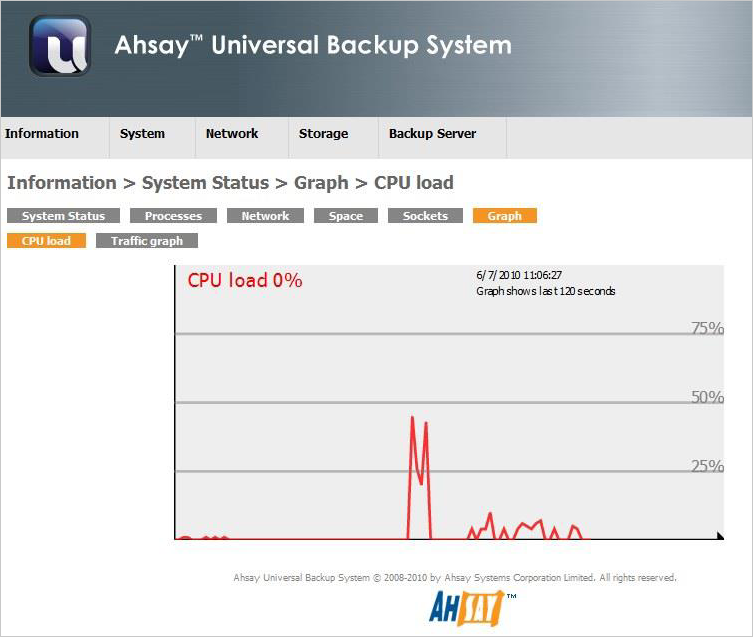 It is a customized version of FreeNAS firmware with AhsayCBS bundled and is specifically optimized to run AhsayCBS. Apart from AhsayCBS, it also contains some basic features that system administrator require, e.g. SSH and system monitoring tools.

For backwards compatibility with older AhsayUBS versions, the UFS storage model is also supported. After upgrade, the 'geom_concat.ko', 'geom_stripe.ko', and 'geom_raid5.ko' module will be loaded by the FreeBSD to support the UFS storage model. To check if these kernel modules have been loaded correctly you can run the “kldstat” command, which will return the following output.

The 'Master Storage Device' on AhsayUBS is preserved in UFS format which is mounted on '/ubs/mnt/eslsfw' upon system boot time. The following example shows a UFS filesystem mount as '/ubs/mnt/eslsfw'.

The Optional Labelled Device in the legacy AhsayUBS will migrated in this version of AhsayUBS which is one of the storage types called “Optional Storage” inside the “Additional Storage”. Volume status and UFS filesystem integrity checking (fsck) are also available in this AhsayUBS version. For details, please refer to the section [Storage].

AhsayUBS is implemented with ZFS v5 and ZPOOL v28. The existing ZPOOL(s) will not be upgraded and only newly created ZPOOL will be applied with the ZIL (ZFS Intent Log).

As the ZFS storage model is based on a GMIRROR and ZFS design, therefore the 'geom_mirror.ko', 'opensolaris.ko', and 'zfs.ko' kernel modules will be loaded by the FreeBSD. The GEOM kernel modules used previously for UFS support 'geom_concat.ko', 'geom_stripe.ko', and 'geom_raid5.ko' will also be loaded. To check if these kernel modules have been loaded correctly you can run the “kldstat” command, which will return the following output.

The 'Master Storage Device' on AhsayUBS is configured as a ZPOOL with the following pool name 'eslsfwx{UID}' format. The ZFS pool will be mounted on '/ubs/mnt/eslsfw' upon system boot time. The following example shows a zpool volume of size 191GB “eslsfwx839830C2” mount as '/ubs/mnt/eslsfw'

For volume status and ZFS filesystem integrity checking, please refer to the section [Storage] for details

The other “esgpbt”, “esosfw”, and “esfmfw” System Firmware Devices are still mounted from the /etc/fstab file.

The ZFS storage model is used for the following AhsayCBS locations:

The other “System Firmware Devices” such as “esgpbt”, “esosfw”, and “esfmfw” will remain unchanged as GEOM MIRROR based UFS volumes. The GEOM device names are in the following formats:

In order to safeguard the data integrity of the files on the ZFS volume, a weekly “zpool scrub” (zpool volume data integrity check) is performed starting at 00:00 every Sunday morning, to verify the checksums of all the data in the specified ZFS pools are correct.

The scheduled started time of the “zpool scrub” is currently not user configurable and it cannot be disabled in this version of AhsayUBS.

Once the “zpool scrub” job has started it is not possible to stop it.

If an additional data integrity check is required in between the scheduled weekly checks. It is possible to initiate a manual “zpool scrub” using the “zpool scrub {% POOL_NAME%}” command.

As with the weekly “zpool scrub”, the AhsayCBS service and backup/restore operations can continue to run as normal.

The ZFS version 5 and ZPOOL v28 on AhsayUBS has undergone an extended period of intensive performance and load testing, which has consistently delivered superior performance and data integrity results in comparison to UFS.

For legacy AhsayUBS environments who wish to migrate from UFS to ZFS storage model, only a manual migration method is available where you need to offload your locally stored User Home data, AhsayUBS setting, and AhsayCBS settings; to another temporary storage device, then reinstall AhsayUBS from new, then reload your data and settings back.

The migration process will generally involve:

The process to setup AhsayUBS firmware onto a machine is done in four stages:

There are different software/hardware requirements for each stage. Please ensure that all the requirements are met before deploying the AhsayUBS to the machine.

AhsayUBS Firmware is based on a customized version of FreeNAS firmware with AhsayCBS bundled and is specifically optimized to run AhsayCBS. Apart from AhsayCBS, it also contains some basic features that system administrator require, e.g. SSH and system monitoring tools.

The GPBT, OSFW and FMFW volume are configured as RAID1 mirror in UFS file system to form the core system.

If the LSFW file system runs out of disk space, extra storage can be added to the system by either: 1. Adding a new block device to the system hardware. 2. Creating an iSCSI connection to a remote storage server.

The added block devices will be partitioned and formatted to form “Modular Storage (ZFS + ZIL)”.

Expandable Storage volumes (ZFS) can no longer be created.

There are three types of Additional Storage: 1. Modular Storage (ZFS / ZFS+ZIL) can be created by one or more local block device to form a volume either in RAID0, RAID1 or RAIDZ (is dependent on the number of hard disks used to form the volume). Since this AhsayUBS version, the underlying ZPOOL will be added with a ZIL layer (ZIL = ZFS Intent Log). 2. Expandable Storage (ZFS) [legacy] created in the former AhsayUBS versions with a hardware RAID volume or an iSCSI initiator session connected to this AhsayUBS machine. A RAID0 ZFS filesystem will be formed for each of the Expandable Storage. It is for supporting the old migrated AhsayUBS only and cannot be created in this version of AhsayUBS. 3. Optional Storage (UFS) [legacy] called “Optional Labelled Device” on earlier AhsayUBS versions. It is for supporting the older migrated AhsayUBS installations only and cannot be created in this version of AhsayUBS. By configuring the AhsayCBS, the “Additional Storage” can be used as additional storage for storing server configuration files and backup data. Note:

The AhsayUBS WebAdmin page, under [Storage] > [Summary] will show the overview of the volumes created on AhsayUBS. 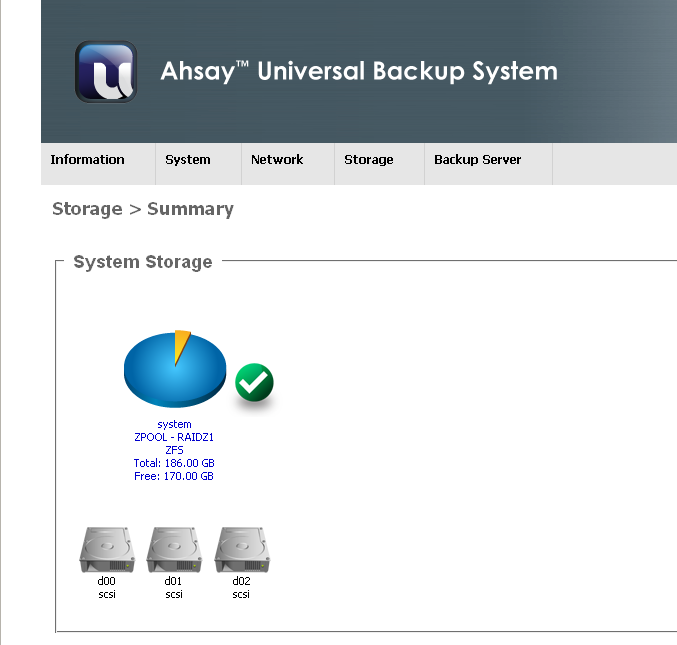 AhsayUBS provides console access to the “System Management Console” by connecting a keyboard and a VGA monitor to the physical machine.

To prevent unauthorized access to the AhsayUBS System Management Console, it is advised to change the default AhsayUBS administrator password.

The selected machine must meet the following requirements:

Please ensure you have updated your network firewall settings to allow network traffic through the following ports to your AhsayUBS server:

AhsayUBS supports up to a maximum of 32 virtual processors for both i386/amd64 compatible CPU’s.

In order to comply with the maximum supported virtual processors limit on FreeBSD, the system administrator should verify the number of virtual processors enabled on the AhsayUBS machine and apply the correct processor setup on the machines BIOS before proceeding with AhsayUBS installation or upgrade.

The maximum number of virtual processors is calculated as:

The following are examples of processor configurations.

It is recommended the number of cores per CPU be set at 8 on the machine BIOS:

It is recommended that Hyper Threading is disabled on both CPU’s on the machine BIOS:

It is recommended that Hyper Threading is disabled on both CPU’s and the number of cores per CPU be set at 8 on the machine BIOS:

If AhsayUBS is installed on a machine where the number of virtual processors configured exceeds the maximum supported value of 32. This will cause FreeBSD to become unstable and crash, which could result in data corruption on AhsayCBS.

AhsayUBS installer is available in img and ISO formats.

The upgrade process will not be able to continue on system configuration with one or more DEGRADED RAID devices.